Angular ball bearings can bear both radial and axial loads. Can work at higher speeds. The larger the contact angle, the higher the axial load carrying capacity. The contact angle is the angle between the line connecting the contact points of the ball and the raceway in the radial plane and the line perpendicular to the bearing axis. High-precision and high-speed bearings usually take a 15-degree contact angle. Under the action of axial force, the contact angle will increase.

Single row angular contact ball bearings have a contact angle, so they are suitable for bearing axial loads in one direction, or combined loads. Structurally, the axial component force is generated after bearing radial load, so two bearings are used oppositely, or two or more bearings are used in pairs. Single row angular ball bearings can use the preload method to improve rigidity, so they are suitable for machine tool spindles with high rotational accuracy.

The precision angular ball bearings for the spindle are listed in four sizes: 718, 719, 70 and 72. For bearings with the same inner diameter, the outer diameter and width increase in turn. 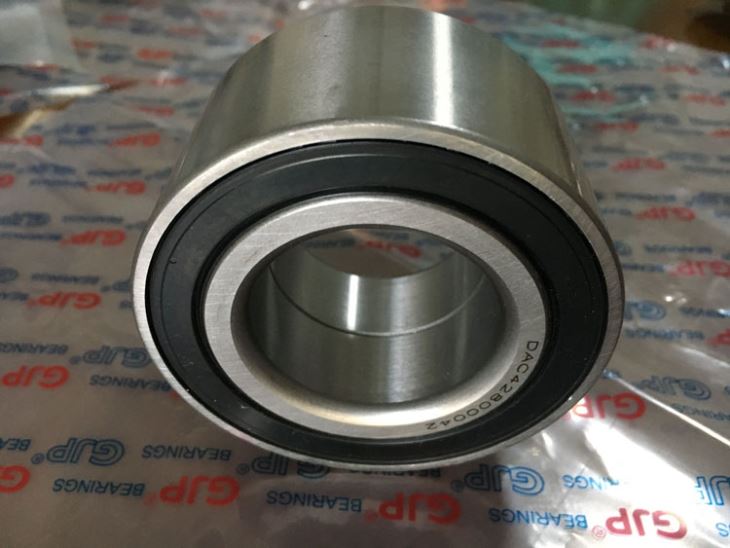 The angle ball bearing for bidirectional thrust is composed of two shaft washers, one seat washer, one spacer sleeve and two rows of rolling elements and cage assemblies. The clearance and preload of the bearing can be adjusted by grinding the thickness of the spacer. The contact angle of the bearing is 60°. The nominal outer diameter of the bearing is the same as the outer diameter of the matching double row cylindrical roller bearing, but there is a gap between the outer ring and the box hole. Therefore, the two-way thrust angular ball bearing does not bear radial load, which is different from that of the double row cylindrical roller bearing. Cylindrical roller bearings are used together to withstand bidirectional axial loads.

Two-way thrust angular ball bearings are divided into two size series, 2344 and 2347. The 2344 series bearings are used to match the small end of the double row cylindrical roller bearing with the tapered hole, and the 2347 series are used for the big end.

There is an annular oil groove and three symmetrically distributed lubricating oil holes in the middle of the outer ring of the two-way thrust angular contact ball bearing. The lubricant is introduced between the two rows of rolling elements and the cage assembly, and the purpose of lubrication is achieved by the rotation of the bearing.

(1) Standard design of A-type bearings with an outer diameter less than or equal to 90mm. There is no ball gap, so it can withstand equal bidirectional axial loads. Using light glass fiber reinforced nylon 66 cage, bearing temperature rise is small.

(2) Standard design of A-type bearings with an outer diameter greater than 90mm. There is a ball gap on one side, equipped with a steel stamping cage or a brass solid cage.

(3) E-type is a reinforced structure with a ball-loading gap on one side, which can hold more steel balls, so the bearing capacity is higher.

When installing the double row angular ball bearing, it should be noted that although the bearing can bear bidirectional axial load, if there is a gap for the ball on one side, care should be taken not to let the main axial load pass through the groove on the side with the gap.

Angular contact ball bearings can bear radial and axial loads at the same time, and can work at higher speeds. The larger the contact angle, the higher the axial load carrying capacity. High-precision and high-speed bearings usually take a 15-degree contact angle. Under the action of axial force, the contact angle will increase.

Xiamen Smark Bearing is a professional pillow block bearing exporter. We have advanced production technology and excellent product quality. If you want to know more about our products, you are welcome to consult us.